If your work is charging electric cars, you should of course also practice what you preach.
So I rented a Renault Zoe for a while, so I can experience what other EV drivers have to live with. It is a Zoe R110 limited, so 44.1 kWh battery, of which 41 kWh usable. It's an R, no Q and so no QuickCharge: unfortunately. The R110 has a WLTP range of 300km.

After picking up the Zoe, I went to the Decathlon, to buy something. I know that at the Decathlon they have a row of Charge Points, nice test possibility. It turns out to be eNovates charging poles of Blue Corner.
First time really charging in the field!!
Plug the cable into the car, cable into the Charge Point. Swipe the Elec2Go pass. LEDs on the Charge Point flash from green to blue flashing, to red to blue. Disco Disco. And what does that mean? The car gives something of "... Check... "So expect it to be busy. Went to buy the things I needed, came back. Nothing has happened, no energy charged. Put the cable in the car and go home.

I don't have a home charger, so I need to use a public charging station. I want to go to the nearest charging station, which I know where it is. Look it up to see if that is free. Strange, both Oplaadpalen.nl and the NewMotion app don't show this Charge Point. Drove to the Charge Point. Yes, it really exists. An EV-Box Charge Point managed by Nuon. Plug in the cable, wipe the Elec2Go card: LED starts flashing, couple seconds later: Green! So it can be! Car tells me 2:05 to full charge. What? 2 hours to go from 87% to 100%? This is still an 11kWh Charge Point and there is no 2nd car charging. I have time, I will check this later. During the walk home, installed the Nuon app. The Nuon app shows the Charge Point. So you really need more than 1 app to find all the Charge Points. 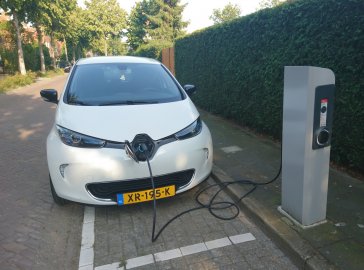 Tomorrow I have to leave early, so do not want to walk to the car, and it should be full anyway. So before dinner, I picked up the car. Yes, nicely full. With the remote control unlock the cable on the car side. Cable is still locked on the Charge Point side. Swipe the card: click, disconnect Cable.

Still curious as to why it didn't work at the Blue Corner Charge Point, drove to the Decathlon. Tried a different Charge Point. Plugged in the cable, swiped the Elec2Go pas: Blinking indicator, red then blue... Nothing. Without removing the cable, swiped the NewMotion pas: Blink: blue... And charging! So the Elec2Go pass doesn't work with Blue Corner. Learned something. This is also not an automatic unlocking if the cable is unplugged from the EV, so swipe the NewMotion card: click.

It's that I know how it's supposed to work, but can imagine it can be frustrating for a layman it can be very unclear. I was already of the opinion that only the LEDs and different colors are not enough to explain the driver of what goes wrong. Advice to the manufacturers: either add a display or at least have a number of red LEDs, attach a sticker to explain what each LED means: Pass not valid at this Charge Point, no connection to the car, Charge Point is offline etc.