(NL) Nederlands (EN) English
How to Use a No-name Router with a DeWalt Guide Rail: Use a modded Makita adapter

As a DIY enthusiast, I'm always looking for ways to maximize the potential of my tools. I just bought a DeWalt circular saw (DWE576K), including a DeWalt guide rail (DWS5021-XJ). A guide rail makes it a lot easier to saw wood in a straight line. 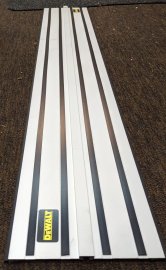 The newer known brand routers have an option to run them on a guide rail. DeWalt routers have this option, but come at a price. I have a cheap no-name router, there is no guide rail adapter available for this router. 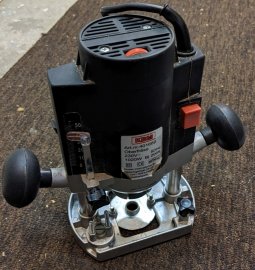 I bought the Makita guide rail adapter (194579-2) to test if it works with both my no-name router and the DeWalt guide rail. DeWalt also has an router adapter, the DWS5031, but it is unclear what the diameter and center-to-center distance of the rods is. So I got the Makita as it should fit my router.

The Makita guide rail adapter (194579-2) is a build to use a Makita router with Makita guide rails. As Makita and Festool rails are almost the same, you can expect the adapter to also work on Festool rails. De adapter is designed to work with Makita routers, but has two options to connect routers, so it can work with many no-name routers. It comes with both 8 mm and 12 mm rods.
The 8 mm rods are for 85 mm center-to-center distance.
The 12mm rods are for 115 mm center-to-center distance. 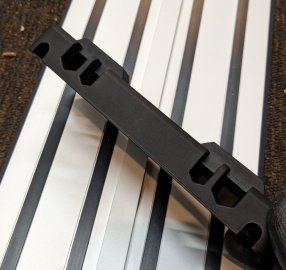 How to Use the Makita Adapter with my No-Name Router

Using the Makita Guide Rail Adapter with my no-name router is easy. My no-name router has 8mm rods with a 85mm center-to-center distance. It is just a matter of sliding the rods into the base of the router, attaching both sides of the Makita adapter to the rods and lock them with the thumb screws.

How to Use the Makita Adapter with a DeWalt Guide Rail

The Makita Guide Rail Adapter does not fit the DeWalt guide out of the box. The rail is just a that too width for the adapter.

I took a good look at the adapter, the middle of the adapter is wider and does fit over the rail. The outsides are thicker plastic, they seem thick enough to file them down a bit to make the adapter fit. 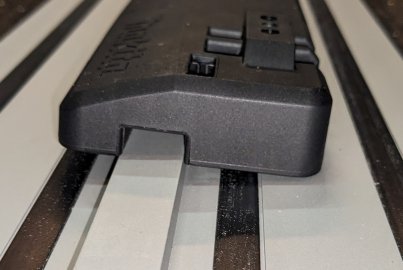 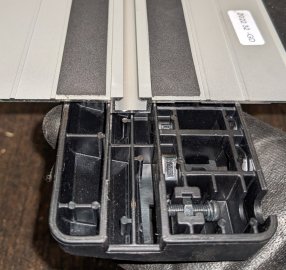 I carefully filed down the outsides of the adapter. Took a couple of minutes to make it fit and slide easily.
Once the adapter fits, attache the router to the rods. The router should slide easily on the rail. If the is too much play, you can tighten the screws a bit to reduce the play. 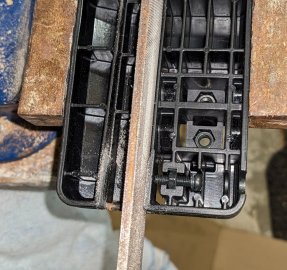 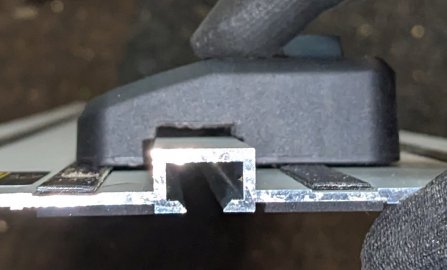 The Makita Guide Rail Adapter is an incredibly versatile, powerful and affordable accessory that can help you maximize the potential of your router. The adapter allows you to easily move the router along the rail, ensuring accuracy and precision in your work. If you own a router and a guide rail, I strongly avice to try the Makita guide rail adapter. If you own one of the following DeWalt guide rails: DWS5023-XJ, DWS5022-XJ, or DWS5021-XJ, you can be sure, you can make the adapter fit your guide rail.